Jennifer Estep is a New York Times bestselling author, prowling the streets of her imagination in search of her next fantasy idea.
Jennifer writes the Elemental Assassin urban fantasy series for Pocket Books. The books focus on Gin Blanco, an assassin codenamed the Spider who can control the elements of Ice and Stone. When she’s not busy killing people and righting wrongs, Gin runs a barbecue restaurant called the Pork Pit in the fictional Southern metropolis of Ashland. The city is also home to giants, dwarves, vampires, and elementals – Air, Fire, Ice, and Stone.

Since I read the Myhos Academy at the beginning of the year, I´m a big Fan of Jennifer Estep. A few other bloggers and me had the idea to do a christmas blogtour and we thought it would be nice to interview some authors. In my opinion it´s always interesting to see how people celebrate christmas in other countries. So I decided to ask Jennifer Estep and  I couldn´t believe it, when she said ‘yes’.

Everyone who doesn´t know a book of her yet, should urgently change that. She has an unbeliveable great spelling style. Her storys are compelling, exciting, magical and especially touching. The characters always find a way to your heart immediately and soon you feel a deep bond. In the following books of a series it always feels like coming home to old friends. I can also say, the Mythos Academy is in my top 3 of all book series next to Harry Potter and the Twilight Saga.

Because she is really one of my favourite authors, I want to show her books after the interview.

1.) First of all I would like to know how you and your family are celebrating Christmas? Are there any traditions like special food or music for example?

2.) What was your best or worst Christmas present?

JE: One of the worst Christmas presents that I ever got was an olive tray, which is a long, skinny dish that you use to serve olives. You line the olives up in it single-file, so the dish is not really big enough to put anything else in, not even candy. I also got a jar of olives with the tray. I don’t like olives at all, so that was a pretty bad present.
I also got a man’s manicure (nail clipping) set for Christmas one year too. That was another bad present.

3.) Did you ever write a Christmas story or could you imagine doing that?

JE: Several of my books are set around the holidays, including KISS OF FROST, book #2, in my Mythos Academy series. The holidays make a great backdrop, and it’s a lot of fun for me to describe all the decorations, food, music, and more.
UNRAVELED, book #15, in my Elemental Assassin series, also takes place around Christmas, and so does NICE GUYS BITE, an e-novella in my Elemental Assassin series. UNRAVELED is available now in English, and NICE GUYS BITE will be released in English on Dec. 12.

4.) How do you think would Gwen Frost celebrate  Christmas?

JE: I imagine Gwen celebrating with Daphne, Logan, Vic, and all her friends. I picture them all going over to Grandma Frost’s house to open presents and have a hearty holiday dinner with lots of great desserts.

5.) Last but not least I wanted to ask if you could tell us a little bit about your plans. Will there be a new book series in the near future or maybe the long desired movie adaption of the Mythos Academy (which would be so great)?

JE: As of right now, there are no plans to do a movie or TV show based on my Mythos Academy books. That is something that I have no control over.

However, I am pleased to announce that I will be doing a Mythos Academy spinoff series. The heroine will be Rory Forseti, Gwen’s cousin from MIDNIGHT FROST and KILLER FROST. The spinoff series will be published in German by Piper Verlag. I believe that the first book will be out sometime in late 2017, but I’m not sure about that. We’ll see what happens.

I hoped you enjoyed the interview. :-) These are really great news, that there will be a Mythos Academy spinoff series and I´m really looking forward to it. I hope we can hear and read a lot more of Jennifer in the next years. You have now the chance to get to know her books.

Discription book #1:
My name is Gwen Frost, and I go to Mythos Academy — a school of myths, magic and warrior whiz kids, where even the lowliest geek knows how to chop off somebody’s head with a sword and Logan Quinn, the hottest Spartan guy in school, also happens to be the deadliest.
But lately, things have been weird, even for Mythos. First, mean girl Jasmine Ashton was murdered in the Library of Antiquities. Then, someone stole the Bowl of Tears, a magical artifact that can be used to bring about the second Chaos War. You know, death, destruction and lots of other bad, bad things. Freaky stuff like this goes on all the time at Mythos, but I’m determined to find out who killed Jasmine and why — especially since I should have been the one who died …
Short storys of Mythos Academy 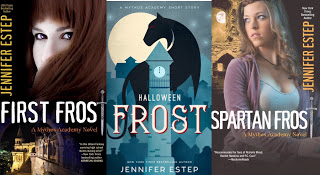 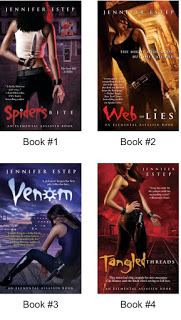 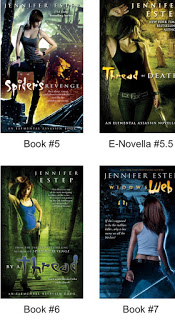 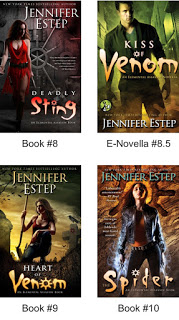 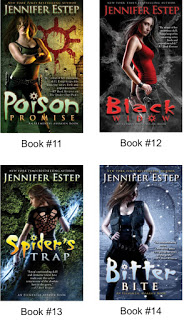 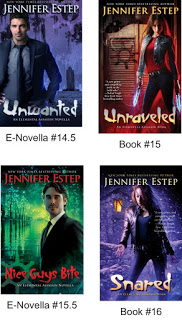 Discription book #1:
My name is Gin, and I kill people.
They call me the Spider. I’m the most feared assassin in the South — when I’m not busy at the Pork Pit cooking up the best barbecue in Ashland. As a Stone elemental, I can hear everything from the whispers of the gravel beneath my feet to the vibrations of the soaring Appalachian Mountains above me. My Ice magic also comes in handy for making the occasional knife. But I don’t use my powers on the job unless I absolutely have to. Call it professional pride.
Now that a ruthless Air elemental has double-crossed me and killed my handler, I’m out for revenge. And I’ll exterminate anyone who gets in my way — good or bad. I may look hot, but I’m still one of the bad guys. Which is why I’m in trouble, since irresistibly rugged Detective Donovan Caine has agreed to help me. The last thing this coldhearted killer needs when I’m battling a magic more powerful than my own is a sexy distraction . . . especially when Donovan wants me dead just as much as the enemy.
Black Blade 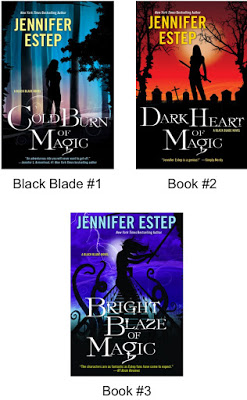 Discription book #1:
It’s not as great as you’d think, living in a tourist town that’s known as “the most magical place in America.” Same boring high school, just twice as many monsters under the bridges and rival Families killing each other for power.
I try to keep out of it. I’ve got my mom’s bloodiron sword and my slightly illegal home in the basement of the municipal library. And a couple of Talents I try to keep quiet, including very light fingers and a way with a lock pick.
But then some nasty characters bring their Family feud into my friend’s pawn shop, and I have to make a call—get involved, or watch a cute guy die because I didn’t. I guess I made the wrong choice, because now I’m stuck putting everything on the line for Devon Sinclair. My mom was murdered because of the Families, and it looks like I’m going to end up just like her…
Bigtime 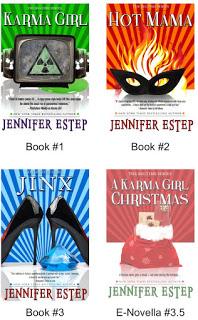 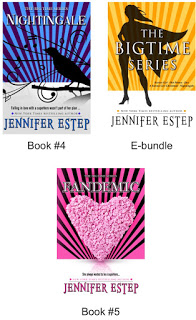 Discription book #1:
Investigative reporter Carmen Cole gets the surprise of her life on her wedding day when she discovers that her fiance and best friend are sleeping together – and that the two of them are her town’s resident superhero and ubervillain. Shocked and hurt, Carmen reveals their secret identities and then decides to devote her life to unmasking every superhero and ubervillain who crosses her path.
A series of successful unmaskings lands Carmen a job at The Expose, one of the biggest newspapers in Bigtime, New York, a city that’s full of superheroes and ubervillains. Carmen is in her element – until she gets kidnapped by the Terrible Triad, Bigtime’s most dangerous ubervillain team.
The Triad orders Carmen to uncover the secret identity of Striker, the leader of the Fearless Five, Bigtime’s most popular superhero team – or else they’ll drop her in a vat of radioactive goo. With that threat hanging over her, Carmen sets out to unmask Striker, but what she doesn’t count on is falling for the sexy superhero. But with the Terrible Triad lurking around, this is one story that just might be the death of her …
If you want to know more about Jennifer Estep or always want to know what´s new, you can visit her on the following pages. I´m sure, she would be very pleased. :-)
Website: http://www.jenniferestep.com/
Blog: http://www.jenniferestep.com/blog/
Facebook: http://www.facebook.com/JenniferEstepAuthor?fref=ts
Twitter: http://www.twitter.com/Jennifer_Estep  (@Jennifer_Estep)
Goodreads: http://www.goodreads.com/author/show/580315.Jennifer_Estep
Bild- und Textquellen: Pocket Books, Kensignton, Jennifer Estep
Banner: Pixabay
Loading Likes... 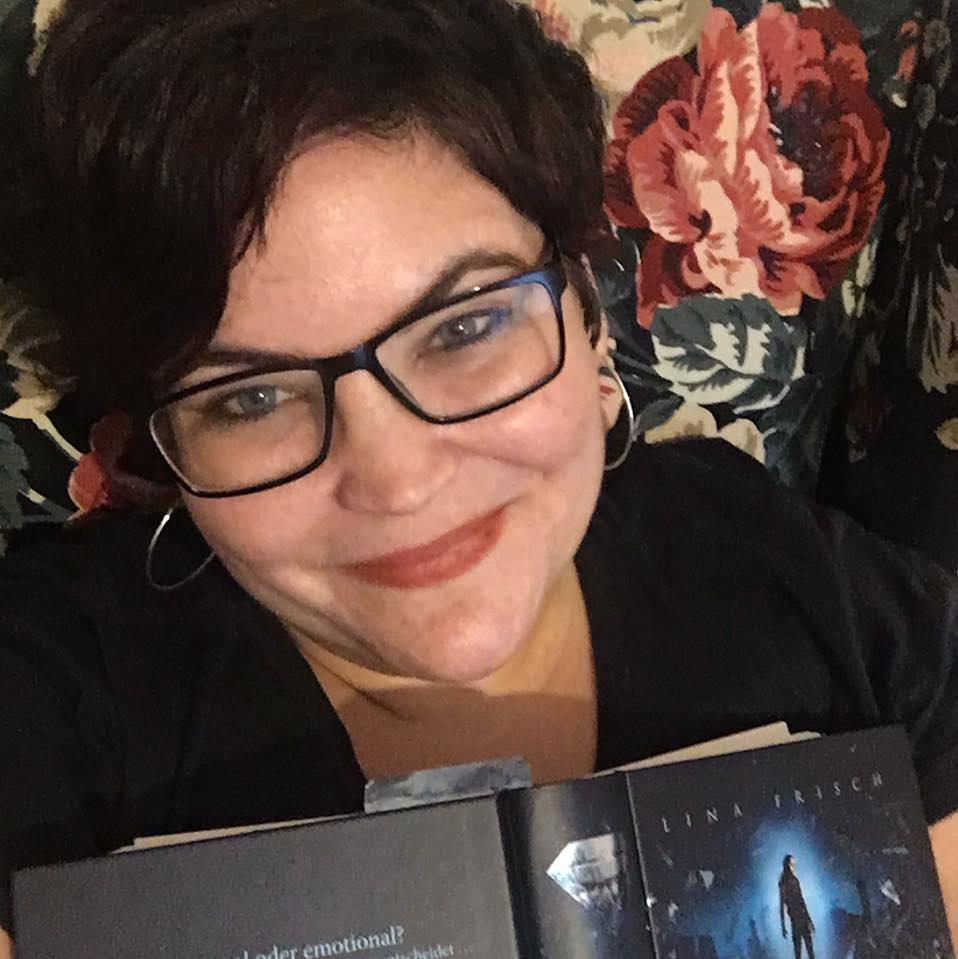 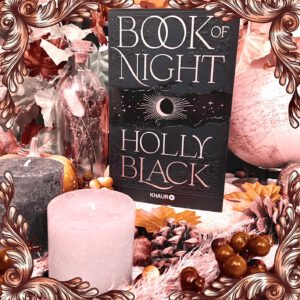 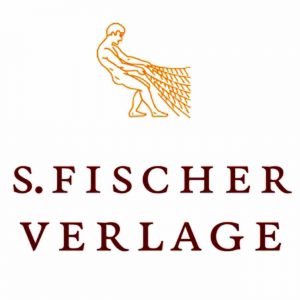 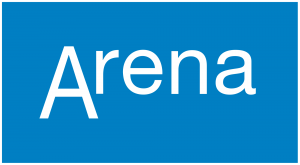 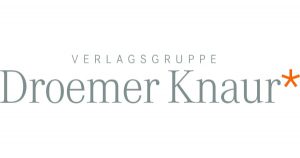